This quarter, the spotlight is on Steve Meador..

Steve was born in Fort Smith, Arkansas and moved to Charleston when he turned 14. He graduated from Charleston High School and then attended Westark Community College, where he earned a degree in welding. Today, we would know Westark Community College as UAFS. Once he finished college, he landed his first welding job at Burt’s Steel, where he worked for the next 6 years. His future took a turn when he was offered a manager’s position at Butler & Cook Machine Shop. While Steve was working there, Keith Kohler, Action foreman, told him to apply at Action. From there it was uphill all the way! Jamie Wright, who we know today as a project manager, back then was our HR Dept. Jamie offered him a position as a welder on June 19, 2006. During the next 13 years, Steve would attend school to become a journeyman plumber and be promoted many times. He went from welding, to the plumbing shop, to maintenance & tool manager, to facility & logistics manager, where he is today!

When Steve isn’t working, there is a side of him, many do not know. Steve is a member of the MMA; Mixed Martial Arts, full contact fighting. He joined about 1.5 years ago, has competed in 3 fights, where he won all of them….way to go Steve!!

Steve grew up being a sport enthusiast. You could say it’s in his genes, as his late father, Dr. Meador, had once played for the Celtics and Memphis State Basketball teams.. 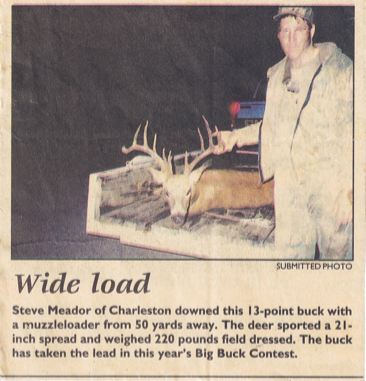 Steve and his wife Pam, enjoy living on their 30-acre farm in Charleston, with their children & step children Rebecca, Krista, Jared, & Johnathan. Steve, when asked how he would describe his wife, he stated, “Pam is both my left hand and my right hand. She is the person I look forward coming home to.”

In their spare time, they enjoy fishing in the Charleston lake and deer hunting. When asked what his biggest buck was, Steve responded that he had once won the SW Times Record buck contest 16 years ago, when he tagged the largest buck with a 13 point, 21” spread. The buck was shot using a muzzleloader from 50 yards away and weighed 220 lbs, field dressed.

When asked what life lessons he has learned, Steve responded, “Life is a variety of learning. There will be highs and lows and you will realize what is important. Life allows you to learn what’s important to you.”

In closing, I would like to add, that I have not yet met, another person with a greater sense of work ethics, or fairness. There is nothing this man would not do for another in need. I am proud to call him my friend.