This quarter’s spotlight is on Bill Satzler! It took some doing, but he actually agreed to let me write a little story about him. (Not that he had much choice in the matter!)

First, I want to say congratulations to Bill on his retirement after 26 years at Action! Bill will be leaving at the end of September. 26 years is a long time! So how did it all begin??

Bill is originally from Pennsylvania. Being one of four boys, you can imagine that sports played a big part in his growing up. Their back yard was the neighborhood’s ball field. Upon graduating from Penn State in 1974, Bill went to work for Bechtel Construction building Nuclear Power Plants. This gave him opportunities to live around the United States and to work at Arkansas Nuclear One, ANO, in 1983 where he met his beautiful wife Connie and son Josh. They were married in 1984. While they moved back east for 10 years, they decided to step away from the hectic nuclear life and took up roots in York, Pa. where Bill worked for a few local mechanical contractors.

Bill and Connie looked into moving back to Arkansas and, thru some twist of fate, Bill’s resume got into the hands of Dan Johnston, founding partner of Action, Inc. Dan had been looking for a Project Manager/Estimator for their new Little Rock office. After a couple of phone calls, Bill flew into AR and interviewed with Dan and Ron Wright at the Barling office. At that time, the Barling office was actually a separate building where the office parking lot is. Bill flew back home with an offer to consider with Connie. He accepted and their new life began. Bill’s career at Action began in 1994. Since that time, Bill has been the driving force to many exceptional success stories. Consequently, he was promoted to Vice President – Chief Estimator at Action, Inc.

When asked to list several of his favorite projects he’s worked on at Action, Bill put the War Memorial Stadium in Little Rock at the top of his list. This was a renovation to the concourse area, restrooms, offices and home team locker room back in the Danny Ford era. Bill said he didn’t care for him either. The project was given a timeline that nobody thought could be possible to complete. Bill was happy to announce that it was done on time! Bill also listed the Army Aviation Black Hawk helicopter hangar at Camp Robinson, Central High School Renovation and the Arkansas Surgical Hospital in Little Rock. He said he looks back proudly on these projects, along with many others.

When asked what his thoughts are about working at Action for all those years, Bill replied that it has been a very enjoyable ride and worked with some very talented and skilled people. He was glad to be a part of the Action Family. When asked what Bill has to say about his retirement, he paused and then replied, “I’m very excited; this is a new beginning.”

Bill’s plans for the future; he and Connie want to travel to the many wonderful places right here in the USA, go fly fishing, biking, and just enjoy more time with each other.

In closing…..Bill, my wish to you is that, you and Connie will share many years together, staying healthy, happy, traveling, and seeing all the places you dream of. Enjoy your retirement and when the moment hits, stop by and say hi!!
Stay safe my friend.  Robin D’Onofrio 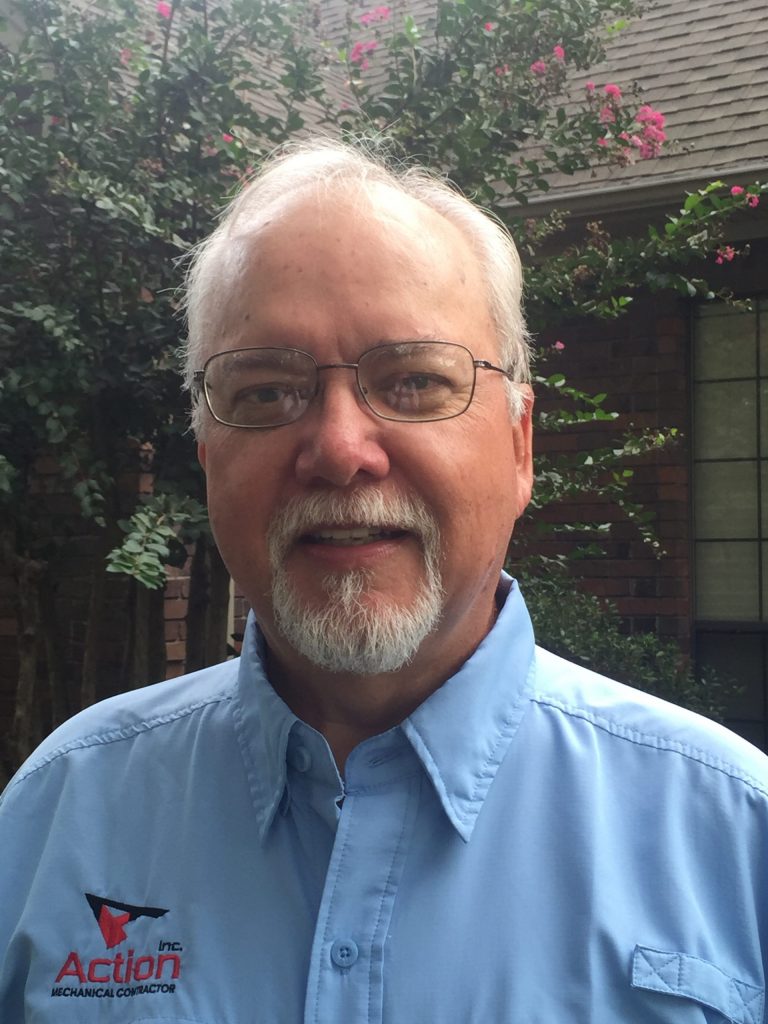