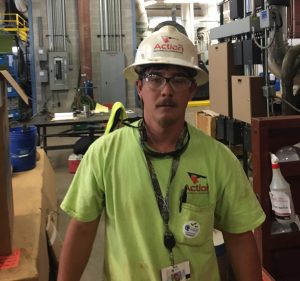 This is what his project manager has to say!

“Justin Driggers (aka Cousin) started at Action Mechanical at the Baptist Health Hospital Conway about 4 years ago as a 1st year apprentice. We immediately knew he was going to make it in this trade with his great attitude and work ethics. He passed his journeyman’s test in May right on time with no problems.

He has been a model employee and apprentice and you rarely hear from Cousin due to he is always working with his nose down and he does not complain. He is another when you ask someone who they want to help they say “Cousin”. That is all a testament to his problem solving and mechanical abilities. I know he will be an exceptional Journeyman and the future is going to bright for him at Action.

He received his nick name “Cousin” on the first day. We already had one Justin and a Dustin on this job and he is Nathan Gaston’s cousin, hint the nick name Cousin and it stuck.